The Lynning: Fact Or Fiction?

It lurks around every corner.  You continually wonder if it’s going to rear its head.  And just when you think the game is safe, it happens.

The Lynning is a term that has seemed to catch on over on the Twitter for that one terrible inning that Lance Lynn always seems to have.  Even when the game seems like it’s cruising along, Lynn gives up a couple of base hits and you start thinking, “Will he get out of it?  Or is it time for another Lynning?”

People have a lot of perception bias.  I don’t think that’s any surprise to folks that are reading this.  When you are looking for something, you are more likely to find it, even if it’s not actually all that uncommon.  I know I always think that Lynn is giving up big innings, but I wasn’t sure if that’s my selective memory working due to the narrative that has sprung up around him, his outings, and the body language he may or may not have while he’s out on the mound.

So I decide to do a little quantifying.  I took the box scores from the beginning of 2012 for Lynn and a selection of other pitchers.  I noted how many runs they allowed and innings they pitched, then jotted out the linescore and noted how many innings of three or more runs they allowed.  I only counted starts, figuring relief outings were a totally different animal, even if they were long relief.  I also counted all runs, earned or unearned, that the pitcher was charged with.  They may have had some allowed by a reliever, but they also may have had some stranded by a reliever.  For a basic analysis, it seemed the easiest way.

Three seemed like a good delineation point.  While in theory there’s nothing that should separate three one-run innings from one three-spot, it just seems that three is a bit more demoralizing.  The inning is longer (at least six men come to the plate), the players get to think about it more, and it’s much more demoralizing to the fans.

Let’s take a look at Lynn by himself and see if this really seems to make sense.  The simple question: does Lynn have as many “big innings” as we think?  (Stats are through starts of May 15, which means Lynn’s two-run, seven-inning outing against the Braves on Friday night isn’t included.)

Since the start of the 2012 season, when Lynn moved into the rotation, he has thrown 435.1 innings as a starter.  Out of those innings, he’s allowed runs in 105 of them, for a SI/IP (scoring innings/innings pitched) percentage of 24.1%.  Out of those 105 innings where a tally has gone up, 28 times three or more runs have been put on the scoreboard.  That’s a BI/SI (big inning/scoring innings) percentage of 26.7%.  So over a quarter of the time, when Lynn gives up a run, it’s a big inning.  6.4% of all his innings are big ones.

How does that break down per start?  Lynn’s had 74 starts, so he has a BI per start of 37.8%.  Which means more than every third time Lynn toes the rubber, he’s got a big inning brewing somewhere in the game.

That seems like a lot.  No, that is a lot!  But the important thing is, is it normal?  Do we overlook those that allow the big runs, not letting them accumulate in our memory?

I took a look at the main starters in the Cardinal rotation over the past two years.  I compared Lynn’s numbers to Jaime Garcia, Joe Kelly, Shelby Miller, Michael Wacha, Adam Wainwright, and Jake Westbrook.  Most of them don’t have as many starts as Lynn–only Wainwright tops Lynn’s 74 starts–but I think they’ve had enough that the rate stats should be fairly comparable. 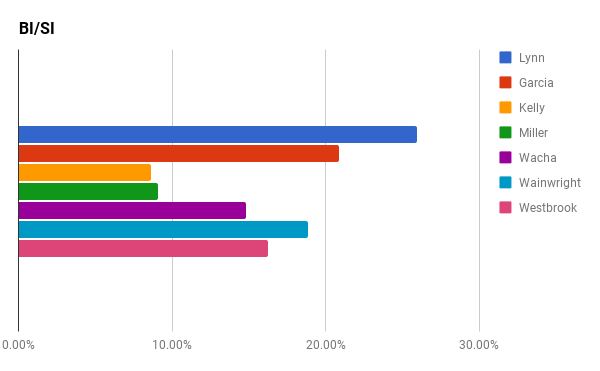 As you can see, Lynn stands out among the other starters in this regard.  Garcia–a pitcher who has battled shoulder issues–really the only one who even gets close to him, and it’s not that close.  Remember, Lynn’s mark is 26.7%.  Garcia’s, which granted comes in just 30 starts, well under half of Lynn’s total, was 20.8%.  It was interesting to see that Miller has the lowest mark, allowing a three-run inning just 7.7% of the time he allows a run in a frame. 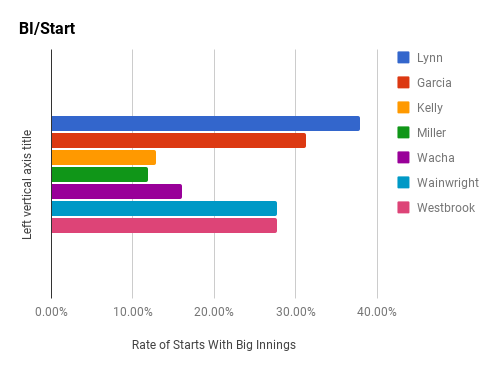 It’s a similar situation when you compare big innings per start. Lynn is at 37.8%, while Garcia is much closer in this category at 33.3%.  However, the smaller starts probably work against Garcia in this situation.  If he could go four straight starts without giving up a big inning, he’d drop under 30%.  Again, Miller and Kelly don’t give up a lot of runs at one time, which is usually a good thing.

Now, you can argue whether this really matters.  As I noted above, in a vacuum it doesn’t matter how the opponent gets their runs since they all count the same, no “get three and get a bonus run free.”  Would you rather have a guy that limited the damage to one inning or one that continually allowed scoring innings?

I decided to compare total scoring innings (SI) to the total innings that the pitcher had pitched.  How often does a run score on them?  Interestingly, in this measure, Lynn actually fared pretty well, coming in the middle of the pack of Cardinal pitchers. 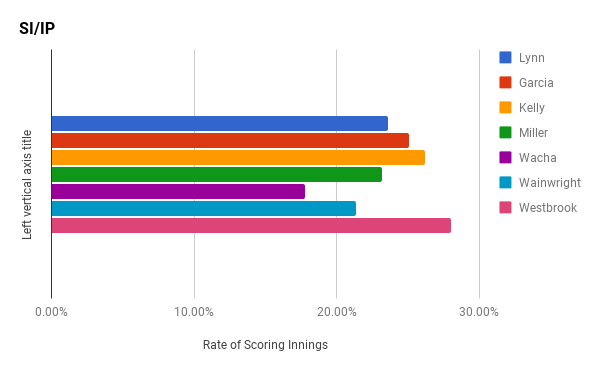 Lynn allows a run in 24.1% of his innings.  By comparison, Kelly allows them in 26.2% of his frames and Westbrook, may he rest in peace, was scored on in a whopping 28% of his frames over this time period.

For better or worse, that helps prove the point.  Lynn’s not a terrible pitcher, he’s not going to be beaten all around the yard, but it does seem that he has that one misstep and then is unable to stop it.

That’s borne out by our next chart, which shows big innings in relation to total innings pitched.  We know that Lynn has had more big innings than everyone else, but he’s pitched a lot more innings than some of these guys as well.  Are his big innings disproportional?  Does he have enough scoreless innings to bring that average in line? 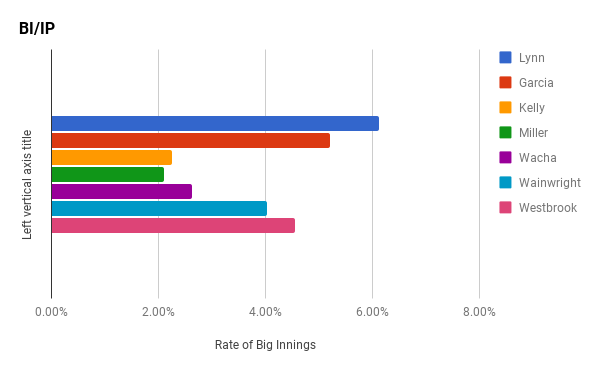 Nope. Lynn allows a big inning in 6.4% of his total innings pitched. That works in tandem with the idea that he allows one in 38% of his starts, in all actuality.  Though it was interesting to note that Wainwright allowed a big inning in 4.2% of his innings over this span, though that does include his season returning from Tommy John surgery, which probably impacted things somewhat.

OK, so we know Lynn is an outlier when it comes to the Cardinal pitchers.  However, the Cards have had really good pitching the last couple of years.  Could it be that Lynn’s big inning outbursts are really not that surprising when you compare him to other pitchers in the league.

Going through box scores is a time suck, but I don’t know any other way to get the information.  So I limited the pool of league starters to one pitcher on each of the other NL Central teams, one I thought might be comparable (or was suggested to me on Twitter) and, per our friend Dennis Lawson’s suggestion, added in NL East pitchers Dillon Gee and Mike Minor.

For the Cubs, we are using Jeff Samardzija.  That was suggested to me on Twitter as a good comparison for Lynn, though I’m now curious (but not enough to do more work) on how he’d compare to Travis Wood.  For the Reds, Homer Bailey was mentioned as a Lynn-comparable when he signed his extension in the offseason, so that made things easy.  For Milwaukee, I went with Marco Estrada, because he’s been someone that’s switched from relieving to starting, sometimes in the same year.  Pittsburgh was a little difficult, but I finally went with Wandy Rodriguez.  True, he switched teams during this span we are looking at, but he was on an NL Central team the whole time, so it seemed to work.

Let’s look at the three charts above, but this time comparing Lynn to our new pool of pitchers. 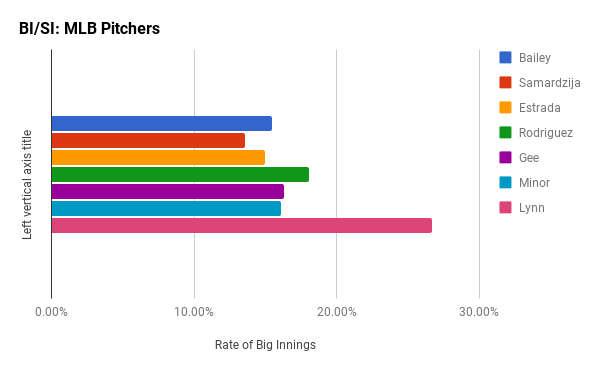 Looks like Lynn really stands out in the big inning to scoring inning standard.  He’s almost 10% more likely to have one than any of our other pitchers. 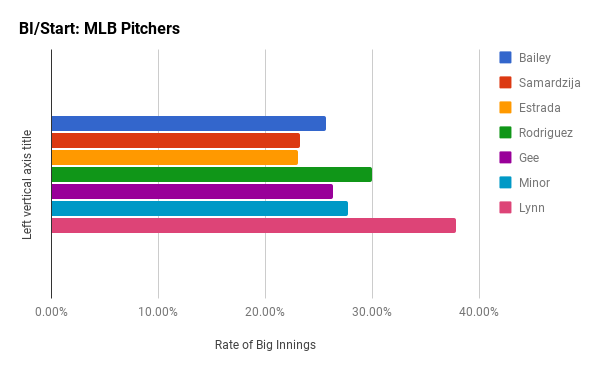 Again, Lynn is the runaway “leader” in this one, allowing big innings in a higher percentage of starts. Only Rodriguez, who allowed them in 30% of his, is even close. 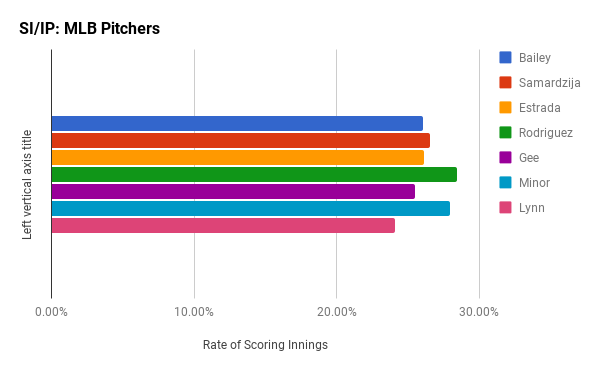 Like we saw with the Cardinal staff, Lynn compares much more favorably when you look at the whole of scoring innings.  He’s actually the lowest rate in our MLB pool–his 24.1% beats out Gee’s mark by 1.3%.  Again, it’s just more proof that Lynn allows his in big bunches, but they are isolated events. 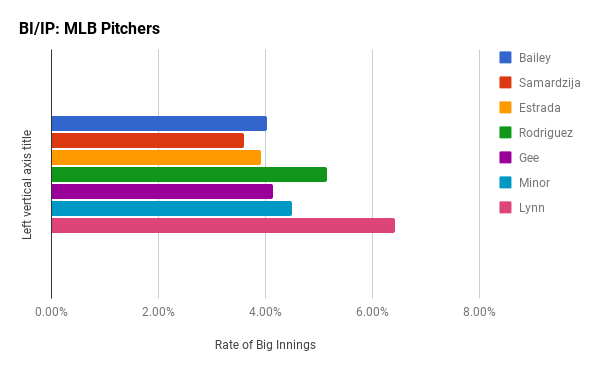 And, finally, we see Lynn back in the lead when it comes to his rate of big innings to innings pitched.  Again, only Rodriguez is close to him, and I think it’s pretty generally accepted Rodriguez isn’t what he used to be.

With these MLB pitchers, the starts disparity wasn’t too great.  In fact, Bailey had exactly as many starts as Lynn over this period and none of the others had fewer than 50.

In case you are wondering, here’s a few raw numbers in relation to some of the rates above. It’ll show you how the big innings break out (three-run, four-run, etc.)

In conclusion, I think it’s quite safe to say that The Lynning is real and not an overhyped phenomenon.  (I know, it’d be shocking if Twitter overhyped something, wouldn’t it.)  The question is, does it really matter?  The Lynning can be a frustrating thing to sit through, but literally half the time (14 of the 28 times he’s had a big inning in a game) those are the only runs that he gives up.  It boils down to if you believe three in one inning is worse than one in three innings, to some regard.

And, as we saw on Friday night, the numbers show that as much as we think it happens all the time, it really doesn’t.  Out of (now) nine starts this season, Lynn’s only had a big inning twice.  One other time he allowed two runs in an inning, which was all that he gave up.

In other words, The Lynning might be real, but it might not be as scary as some think.

Next Post: What if the Wong plan was actually right?