For the first time since 2011, the Cardinals are slated to open the season at home, when they will host the rival Chicago Cubs on Monday, April 3.  The Cardinals will also be home to close out the 2017 regular season  during a weekend series against Milwaukee (Sept. 29-Oct. 1) at Busch Stadium.

The Cardinals first road trip of 2017 will take them to Washington (April 10-12) followed by their first ever trip to new Yankee Stadium, as they will visit the Yankees for a three-game Easter weekend series (April 14-16) that will mark just their second interleague road series in the Bronx and their first since 2003.

The 20-game interleague portion of the 2017 schedule includes home-and- home two-game series with Boston (May 16-17 at Busch Stadium & August 15-16 at Fenway Park) and Kansas City (August 7-8 at Kauffman Stadium & August 9-10 at Busch Stadium).  The Cardinals will host the Toronto Blue Jays (April 25-27) and Tampa Bay Rays (August 25-27) at Busch Stadium and will play a three-game weekend series at Baltimore’s Camden Yards (June 16-18) against the Orioles.

In addition to their season opening series with the Cubs, the Cardinals will also host Chicago for a three-game weekend series May 12-14 and a four-game set (Sept. 25-28) during the final week of the season.

The Cardinals will play the Los Angeles Dodgers six times during a nine-game stretch from May 23-31, visiting Dodger Stadium for three gamesMay 23-25 before hosting the Dodgers the following week (May 29-31).

The Cardinals will make future announcements regarding game times, ticket pricing and ticket availability for the 2017 season.  To view the full 2017 regular season schedule, visit cardinals.com. 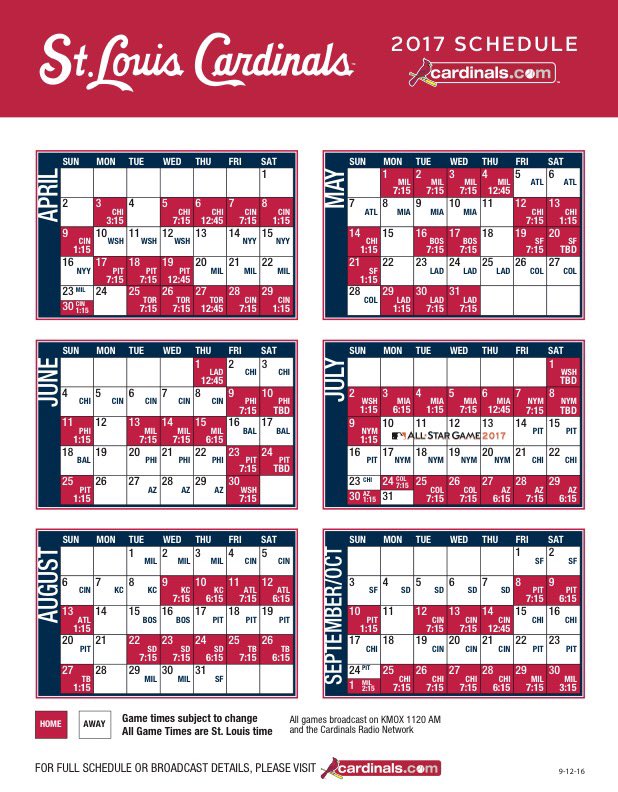 Next Post: Do They Know It’s a Playoff Race?